Consider for a moment the last time you went to the audio store to purchase a sound system. In the bright, electronic 21st century you are asked to invest in a electronic miracle that sends sound waves throughout the house and office, is linked to your cell phone, and can talk to you in the plane or automobile as you head home.

Now look at the smart device that needs a paper legend to figure out what HDMI links to the DVD-Blu-Ray player, television, CD player, radio and home security system. Of course you are in the part of the home that lacks the device legend and you must race about trying to remember what links to what –  and if the separate remotes will talk to or ignore each other. Life is so multi-wired and now you are wired as well, but you have no music and the TV is updating but refuses respond to the cable or TV remote. And you fear calling the store again to recap the directions to access your devices.

Picture as well the slow, manual early twenties. You know which stereo store had the best in German, Japanese, or American audio equipment. Any store would sell you any device they had in stock, but not necessarily the best buy or the best match for you. Imagine the wonderful six foot tall, two foot wide mega speakers that sounded lush in store and would as well if you lived in there. These offered great combinations of incredible audio components were a perfect match if only your living space and bank budget would accommodate the splendor.

In the end you can listen to your system in a cramped space and dream of the audio room in the store that wed you to this incredible buy. You can work every component but you can barely enjoy them.

So what to do?

Seek out an honest and creative audiophile who can find the best manual machines at the best prices and still afford you both the dream of lush sound synergy to the best components you can readily use and fearlessly manage.

It is possible and at a price you can afford. The question this wizard asks, “What is your price point?” and like the magical wizards in Harry Potter tales, he delivers. The sound from these ‘older-fashioned’ components will blow your socks off or detach your toupee; the quality of music will satisfy the most up-to-date audiophiles since it has been proven the older devices are superior in musical clarity and quality over the most excellent CD produced. We are, apparently, back to vinyl and the sound is luscious and gorgeous and you ought really to try it.

At this point you will find yourself offered a plethora of devices to peruse and consider….pick any of the following but ask the audiophile historian wizard to show you how he can magic sound just for you.

The stereo store of old was the place where you could compare and touch the major and minor players of musical sound systems. The Stereo store was the only source for truly impartial assistance and stocked all likely choices, or opinions biased by what was on hand. Do any of these names sound familiar? 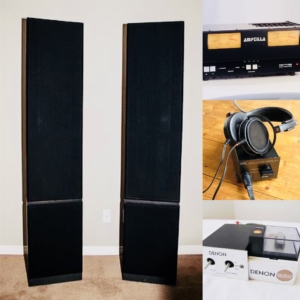 An audio store should provide you valid information, based only on compatibility issues and perceived performance. The staff should be knowledgeable on virtually every component and which works best on your budget. The old school systems budgeted costs between $1,359 – $10,000 …
Today $28,000 – $2-3,000,000.00.
The prevailing question in these tight financial times? Can a system be put together for $300-1000.00? Can a grand system be developed and purchased without auctioning your firstborn, pension off a kidney? YES…It can be done with the aid of an audiophile wizard who thinks outside the box, can accept best technologies from any age that marry a great sound and doesn’t break your bank!

So, let’s focus on the unbiased real world person who wants to build a system for $300 – $2,000
Being a Audiophile historian I make my choices by two rules:
(1) Gear that comes up for sale only when someone dies
(2) Non-main steam audio few have heard of—the later seems to be “what’s hot” and expensive in today’s world and it holds its value.

My Dad always said ” the journey is what it’s all about ”
It’s great when you can say, “I built that system, understand how it works, and how can I make it better!”

More about Wayne Carter, audio system consultant, designer, installer and all round good guy:
The summer of 1974 was hot in Brooklyn, NY – atypical for the East Coast. Staying cool in a relative’s house going down in the basement with A/C on and the glow of McIntosh MC 240s, C 22 and four  Altec Voice of the theater, a Thorens turntable and Pink Floyd Darkside of the Moon, Carter was hooked. He came home and looked at the all-in-one turntable and Beatles albums his sister let him have. Wow!  What could  he do? The summer of ’75 in  Los Angeles, Carter’s brother-in-law introduced him to the   JBL Jubals system and from there they went to Pacific Stereo. The rest is hard work and a lot of cutting grass; detailing cars on the weekends and summers for two years –  a top of the line Technics system and every audio rag he could buy.  In 1978 Carter moved to Palos Verdes with his family with in the first month he became friends with every Hi Fi store owner in the South Bay. Listening to  and building his first Dynaco Pas 3 and his first true audiophile system by the tender age of 19, which brought him to his quest of creating and bring the best sound to each of his clients in the audio world.

Because these cookies are strictly necessary to deliver the website, refusing them will have impact how our site functions. You always can block or delete cookies by changing your browser settings and force blocking all cookies on this website. But this will always prompt you to accept/refuse cookies when revisiting our site.