My name is Aaron Breza and this is my story. 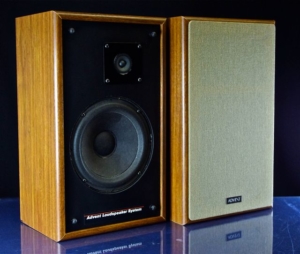 I became a high-fidelity nut at an early age. Still wearing diapers in the early 1980’s I can remember as a child in the living room listening, singing and watching my father, Michael Breza, play records or put in a cassette.

At this time in my life my father’s setup included a Sanyo receiver, Dual ULM turntable with a Micro-Acoustics 3002 phono cartridge, Akai tape deck and Advent 2002 speakers.

My father’s high school buddy who we called “Lil” Wayland and his father “Big Wayland Lutrell were also audiophiles.  “Big” Wayland had a Marantz quadrophonic receiver that was connected to a Phase Linear amplifier, Bose 901 speakers and a Nakamichi Dragon cassette deck.

I remember laying on the floor listening to his music, staring at the green Marantz lights as the quadrophonic needles showing where the sound was going.  Sometimes, I would sit and wait until one side of the cassette was finished and watched the Nakamichi Dragon automatically open and spin the cassette around and close to play the second side.  I was so amused by it all and completely taken by the sound!

As I grew, I inherited my father’s old Panasonic quadrophonic receiver, speakers and super tweeters.  I had a cheap tape deck and a  turntable where I would mimic my father and play music.  Then as I turned 17 I bought my first receiver – an Onkyo. Following that, I bought a pair of Paradigm Atom bookshelf speakers and a Paradigm PS 10 subwoofer.

When I graduated high school, I left for the Air Force in 1995.

Once I was situated on base my father shipped me my stereo system.  I remember my friends were always coming by liking how well my system sounded.

When I came home from the Air Force,  my true endeavors in high fidelity kicked off.

My father had bought a Jolida tube amp 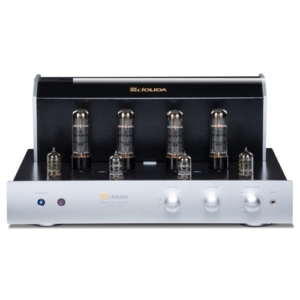 and Triangle Titus XL bookshelf speakers and again, I was intrigued by the visual beauty of the glowing tubes and sound.  It reminded me of the time my father came to visit me in San Antonio, Texas. We went to a local stereo shop and I fell in love with a small Audio Note amplifier.  After hearing my father’s system, I ran out as soon as I could rustle up enough money and bought a used Classe solid state amp.  Though it was a huge improvement I still dreamed of the sound of tubes.

Then, my father and I met Kevin Deal of Upscale Audio in Upland.  After seeing all the tube amps and beautiful speakers Kevin Deal had me hooked.  After calling him multiple times (like I still do today) about a price on a Cary SLI-80 F1 Signature tube amp – and after bugging Kevin enough – I finally traded in my Classe for the Cary SLI-80 F1 Signature.  A short time later I bought a set of Triangle NIIA speakers from him as well.

My father ended up upgrading his speakers to the Gallo 3.1 speakers, Gallo Reference 3 SA bass amp, upgrading the KT- 88’s in the Cary to KT- 120’s, Oppo DV-980H and a Musical Fidelity Tri-Vista 21 DAC.

When you have nothing, family is everything

10 years later I was married and divorced and  had to move into my parents’ home as I lost everything.  Once I was able to get my feet back on the ground and buy another house, I traded my father my Cary SLI-80 F1 signature amp for his amp and also gave him my Nordost Red Dawn cables and Rotel PC PLC-1040 power generator as a thank you for giving me a place to stay when I was down on my luck.

Now for the last three years, I have been back on my feet and back to bugging Kevin Deal!  I have been dealing with Kevin for at least 15 years now and  he has become  family to me and my father.

To me, he’s an icon or role model as he has all the “rockin” stuff… cars which I have a passion for, too .

Kevin ended up selling me

a PrimaLuna Dialogue Premium HP integrated tube amp.  I came home and  hooked it up to my Triangle speakers – I was in love.  I also purchased a PS Audio P10 power regenerator.

Just recently, I became fascinated with vinyl again to take me back to an innocent time in my life.  After going with my father to T.H.E. Show for the past couple of years, I always caught myself looking/listening for the rooms playing vinyl.  This is were my father and I differ as he is more into CD’s and MQA for its ease and lack of crackles and pops from vinyl.

But, nevertheless, my goal is to get him hooked.

I ended up buying an E.A.T C Sharp turntable with the J0. NO5 Cartridge.  I  started blowing Kevin’s phone up again – this time for a phono stage.  I bought a Manley Chinook SE MKII. The purchase after that one is speakers and I have yet to make my mind up as I have not found ones that turn me on like the Wilson Audio Yvette’s (way out of my league).

T.H.E. Show and high-fidelity audio have brought my father and me closer together.  It’s a hobby we both love.  We love the sound of tubes and like the same when it comes to what we want in the sound of speakers.  We like speakers that have great dynamics, imaging and most of all, we like to hear the music coming from the back of the room as if you were at a concert, not up in your face like some speakers.

Where we only differ is in vinyl, but I think that will change.

Going to T.H.E. Show, visiting Kevin Deal at Upscale Audio or just sitting and listening to music is something I will cherish and take with me till the day I die.

Aaron Breza is a music lover, audiophile, a Air Force Medic Veteran, and all round good guy.  He loves his family, especially his puppy, and is a true supporter of great music!

Because these cookies are strictly necessary to deliver the website, refusing them will have impact how our site functions. You always can block or delete cookies by changing your browser settings and force blocking all cookies on this website. But this will always prompt you to accept/refuse cookies when revisiting our site.